CloseCross: Changing the Game in the Derivatives Settlement Space
×

CloseCross: Changing the Game in the Derivatives Settlement Space

Vaibhav Kadikar, Founder & CEO
The financial derivatives market today is worth $1200 trillion, yet only one to two percent of the global population take part in it due to high cost and complexity. Led by a visionary leader, CloseCross is disrupting the face of derivatives trading by lowering the barrier to entry; with its patented multi-party settlement protocol and proprietary algorithms wrapped in a blockchain solution.

CloseCross, a London-based company, has built a decentralized platform that allows any trader to create value for themselves in an easy to understand interface and in a single trade predict asset price movements akin to calls, puts, volatility indexes, etc. “We are the first organization to democratize the derivatives market with a multi-party scenario instead of the traditional one-to-one trading. Through our patented platform, we bring all the market participants in a single smart-contract and let them share value amongst themselves on the assets,” states Vaibhav Kadikar, Founder and CEO of CloseCross.

CloseCross eliminates the role of derivative issuers and intermediaries and creates a world first people-only derivatives market that is for the people and by the people. But how does that happen? At the heart of CloseCross’ innovation is its multi-party market strategy built on a smart contract that tackles unquantified risk. “It is normal to see traders taking more leverage to enhance the outcomes, which can be damaging to the future prospects,” says Kadikar. “With our multi-party mechanism, trading is not a one-to-one mechanism which means you do not need leverage. Instead of changing the leverage variable between two parties, we change the number of parties involved.”

As a result, thousands of traders on the blockchain can still predict the prices of the underlying asset without fearing the risks or complexity that was once inseparable to the industry. What is more, every market participant gets real-time updates on the spread of money along the price spectrum as well as the people-spread, which jointly constitute the crowd-wisdom that today is the privilege of the centralised derivatives issuers.


This removes the imbalance of power in legacy markets wherein the derivative issuers are at an advantage against individual traders. CloseCross levels the trading world playing field with each trader having access to all information at all times.

Further, the innovative platform is a boon to the B2B2C space, where it is solving significant challenges like end-user participation, better revenue, and exciting product display. With CloseCross, about 98 percent of market participants can participate in the rapidly bolstering derivatives space.

Instead of spending heavily on attracting individual investors toward the platform, CloseCross offers its platform and products to the exchanges for free. As exchanges already have traders registered with them, the number of participants in the derivatives trading increases manifold automatically. Moreover, the traders using CloseCross’ market prediction platform do not need any bank or trading account to participate. On the other hand, exchanges can use the platform without paying any fees for participation, customization, and annual maintenance. “We are giving the exchanges a new revenue stream as well as differentiation from their competitors. Traders appreciate avenues where they can enter the markets in multiple formats and asset classes.” says Kadikar.

A case in point, a leading integrated financial service provider approached CloseCross to upgrade its position in the market by adding a unique touch to its offering. With CloseCross, they were able to stand out with a huge business pickup. “Their customer growth was rapid,” extols Kadikar.

The idea of CloseCross can be traced back to 2007 when Kadikar wrote a whitepaper on “Financial Decentralization through a multi-party settlement mechanism”. He waited till June 2008 to apply for patents in the US patents office, weeks before the bitcoin whitepaper came into the public domain. “I received the patent on the settlement mechanism in 2011, and developed a patent-backed peer-to-peer derivatives settlement protocol that drives the fairest risk-reward scenario for all market participants,” Kadikar adds. However, “The world at that time was not ready for ideas like decentralization, democratization, and inclusiveness in the finance space, unlike today,” says Kadikar. In the near future, CloseCross strives to further add innovative functionalities to the platform, where people can essentially resonate with ideas in the asset trading space. 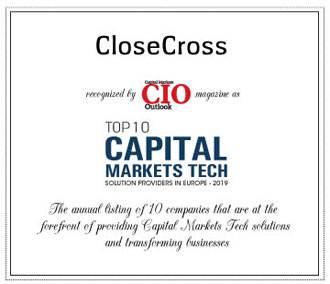 Description
CloseCross offers the first fully decentralized derivatives platform that takes out the complexity of traditional derivatives trading, cuts out most of the cost, eliminates unquantified risk, and provides real-time crowd wisdom on asset price prediction; all benefitting the traders and aimed at financial inclusion in the worlds largest market. CloseCross eliminates the role of derivative issuers and intermediaries and creates a world first people-only derivatives market that is for the people and by the people. CloseCross’ multi-party market strategy built on a smart contract tackles unquantified risk. With the multi-party mechanism, trading is not a one-to-one mechanism which does not require leverage. Instead of changing the leverage variable between two parties, CloseCross changes the number of parties involved